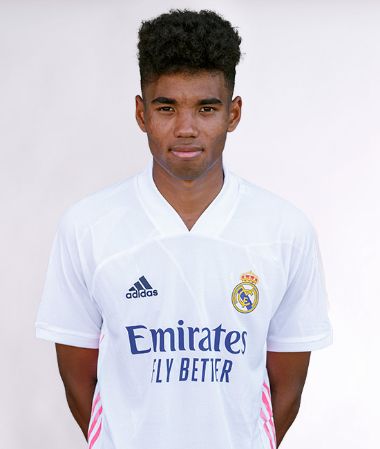 Born in Spain to a Nigerian father and Korean mother, Marvin Akinlabi recently made his debut for Spanish giants Real Madrid, sparking a debate as to where his international future will be. Having come on as a substitute in a La Liga match against Real Sociedad last year, Marvin was named as a starter by manager Zinedine Zidane for their recent match against Getafe.

Marvin played for almost an hour, before being replaced by fellow youngster Sergio Arribas, with the 20-year-old having impressed in a 2-0 win for Los Blancos. Operating as a wing-back, Marvin will have been delighted to get his first start, having previously played just 32 minutes in two first team appearances.
It was only due to injury that Marvin was forced off against Getafe, with the youngster having surprised many by making the step up this season. He was initially named in the Real Madrid Castilla squad, having been at the club since 2016. His performances have unsurprisingly caught the eye of national teams, with Marvin being eligible for Spain, Nigeria and South Korea.

What the NFF Has Said On the Future of Marvin

Nigerian Football Federation Vice President, Seyi Akinwunmi, stated that Marvin would soon feature for the Super Eagles, despite the youngster having already played for Spain at youth level. Speaking on the possibility, Akinwunmi stated that: “Akinlabi is in our plans. We are monitoring every single Nigerian kid out there, the ones that are good enough and who are willing to play for Nigeria. We are speaking with everybody, but it is not everybody that wants to play for Nigeria. It is not everybody that their parents want them to play for Nigeria; (but) we are speaking to all of them, even those who are not willing.”

With the Real Madrid official website describing Akinlabi as a “two-footed, pacy and physical attacking-minded midfielder, who is a danger when he joins the attack, while his ability in one-on-one situations also makes him a threat”, it comes as little surprise that a battle to secure his services will ensue.

How Akinlabi Made His Name in the Spanish Capital

Akinlabi has featured for Sporting Ciudad de Palma, Tranmere Rovers and La Salle previously, before joining Real Madrid in 2016. It is hoped that he will follow in the footsteps of former Madrid man Derik Osede, who switched from Spain to Nigeria in 2015. However, the Spanish Football Federation and Korea Football Association could well have something to say on this. Akinlabi was part of the Real Madrid team that won the UEFA Youth League last season, with a goal he scored against Inter Milan having been named as goal of the tournament.